Zahra's Paradise: A Lens into Iran 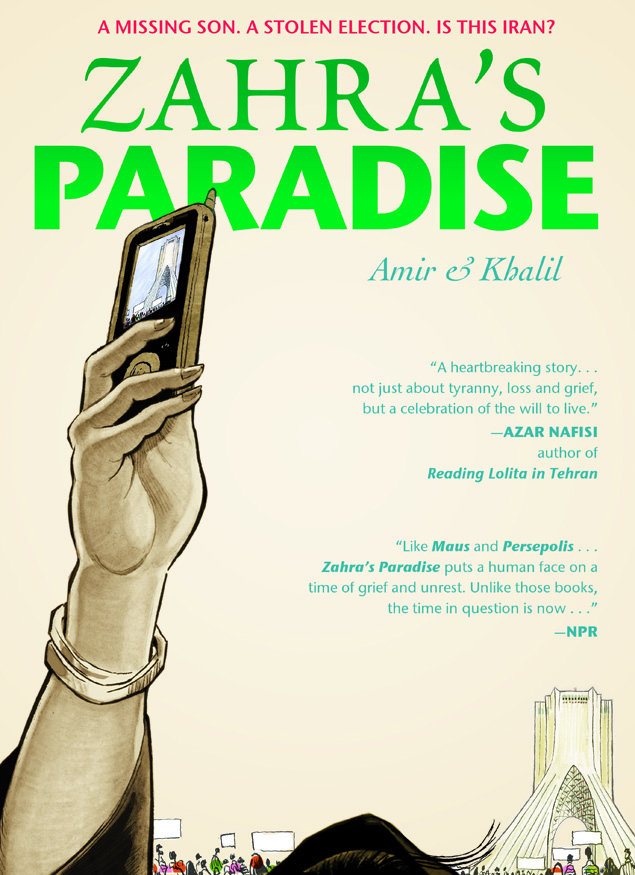 Zahra’s Paradise Written by Amir & Illustrated by Khalil Release Date: September 13, 2011 First Second Publications B&W Hard Cover Graphic Novel | 272 pages ISBN: 978-1-59643-642-8 $19.99   Over the weekend I had the pleasure of reading Zahra’s Paradise, a graphic novel by Amir and Khalil. Set within the context of Iran’s disputed 2009 election, it looks at the peaceful protests that followed and the government’s brutal crackdown that left dozens dead. Using a mix of fiction and non-fiction, Zahra’s Paradise weaves a tale of  real people and events shared through the voice of a single family. Zahra’s Paradise follows a mother and son team – Zahra and Hassan – as they navigate the browning hedges of Iran’s political, judicial, societal, and cultural maze in search of a missing son and brother. Between the novel’s beautifully illustrated panels and poignant dialogue, I found myself again immersed in the original days of Iran’s protests. I re-watched millions of Iranians take to the streets peacefully to raise their voices and cringed again as they were met with violence. There it was again: the secret prisons, the batons and tear gas, the reports of rape, the fees for removing bullets from corpses, the young cut down by oppression, the old beaten into submission. I found myself seated with Zahra and Hassan in every waiting room, standing with them at every prison and hospital, and searching with them at every morgue. It became the story of many families – mine, yours, theirs. Though the novel reflects the journey of only one family, it is hard to miss that the story is not singular. Across Iran – from villages to cities, from green mountains to dry deserts – families have faced their own devastating renditions. One family’s question remains that of too many Iranians today. Where is my child? Where is my parent? Is this really our Iran? “The spark for Zahra’s Paradise came from ,” Amir – the book’s author – shares, “and if we have succeeded in capturing their reflection in our story, then the story will act as a mirror and guide the spark back to the fire from which it sprang.”

Chapter 2 (“Evin”) – click to enlarge the image We connected with Amir to further explore the graphic novel. The full exchange is below.