United4Iran Releases Statement Ahead of Elections 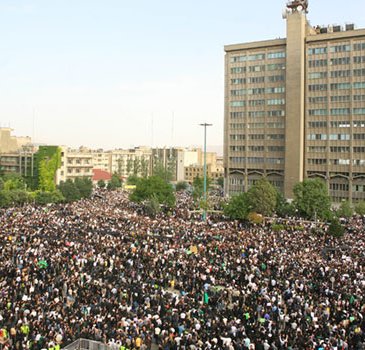 United4Iran Releases Statement Ahead of Elections

Opposition is boycotting and calling for free and fair elections

Washington, D.C. – United4Iran, a nonpartisan human and civil rights nonprofit organization, has issued a statement today outlining deep concerns about the escalating crackdown by the Iranian government on expression and assembly ahead of the March 2, 2012 parliamentary elections. This year more than 100 Iranian citizens have been detained for non-violent activism around the elections. Two have reportedly died in custody. Opposition parties, high-profile political prisoners, and Nobel Laureate Shirin Ebadi said the elections fail to meet international standards and have called for a boycott. “These are not elections we will be observing in Iran on March 2. The selection of who may or may not be a member of Parliament has already been made by the unelected Supreme Leader and Guardian Council,” said Dokhi Fassihian, senior advisor for United4Iran. “Clearly, the lesson of 2009 has been lost on Iranian leaders. It is time for democratic reform that upholds the human rights of the Iranian people to choose their representatives,” Fassihian added. United4Iran’s statement outlines various crackdowns by Iranian authorities including arrests, internet interruptions and intimidation of media professionals. It also details Iran’s authoritarian power structure and its democratic deficits, which are being exploited to further consolidate autocratic control. For a chart on Iran’s power structure click here. An international chorus has called for the release of jailed pro-democracy opposition figures. United4Iran is also urging the Iranian government to invite independent electoral assistance and monitoring and to establish an independent electoral commission. “We are reiterating our call on Supreme Leader Khamenei to allow for freedom of expression and unhindered access to information, to free opposition leaders and all prisoners of conscience and guarantee due process for detained individuals,” Fassihian said. “Authorities should also investigate the deaths of activists and launch a credible accountability process for other alleged human rights violations.” United4Iran is also calling on Supreme Leader Khamenei to institute democratic reforms to ensure elections reflect the will of the Iranian people, meet international standards and Iran’s obligations under the Universal Declaration of Human Rights and the International Covenant on Civil and Political Rights. ## United4Iran (U4I) is a nonprofit organization with the mission of improving Iran’s human rights conditions by mobilizing and uniting the global community and through public awareness and advocacy. Its staff is located in Berkeley, Calif.; Washington, D.C.; and Berlin, Germany. Its international network of allies extends from North and South America to Europe, Africa and Asia. www.united4iran.org