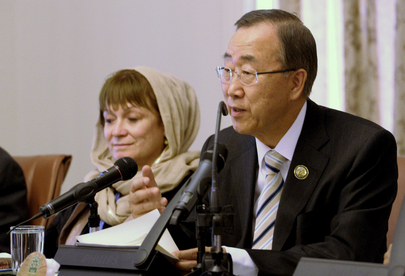 Ban Ki-moon calls on Iran to free political prisoners and permit free expression ahead of 2013 elections August 31, 2012 – United for Iran welcomes remarks from UN Secretary-General Ban Ki-moon at the Non-Aligned Movement Summit in Tehran this week, where he expressed “serious concerns” about Iran’s human rights situation, and urged Iran to cooperate with the United Nations to improve freedoms for its citizens. On his visit, Ban pledged the support of the United Nations and the international community for the people of Iran’s “long struggle for human rights and democracy.” “We have discussed how the United Nations can work together with Iran to improve the human rights situation in Iran. We have our serious concerns on the human rights abuses and violations in this country,” Ban said at a news conference on Wednesday. United for Iran, and hundreds of Iranian activists, called on Ban to raise the dire human rights situation in the country and meet with opposition figures under house arrest. While Iranian officials did not allow such a visit, Ban took the opportunity while meeting with Iranian officials to call on the government release political prisoners and allow for free expression ahead of the 2013 Iranian presidential elections. On Thursday, Ban spoke (video) at a diplomat’s college in Tehran, where he noted the nation’s historical achievements, including the development of the first human rights charter 2,500 years ago. He remarked on his experience with Iran over his diplomatic career, as well as the turbulent transition of his own country, South Korea, from dictatorship to democracy. Ban told the audience that he believed Iran would benefit from “fully drawing on the activism of civil society,” noting that “social activism and critics should never be conflated with national security or a threat to society or the state.” “I have a strong sense that the people of Iran know what kind of society they wish to build,” Ban said. “With freedom and space, Iran’s young people can be a primary engine for driving your country’s progress and standing.” Early in the speech, the UN Chief noted that he expected to see more young people in the audience. Iranian authorities have increasingly repressed its pro-democracy student population due to its strong tradition of dissent and civic activism. Currently, over 40 Iranian student activists are serving jail sentences for peaceful expression. United for Iran estimates that Iran holds well over 500 political prisoners. “The United Nations and the international community are fully behind the people of Iran in your long struggle for democracy and human rights,” Ban stated, in the clearest expression of support by a top UN official since the 2009 crackdown on pro-democracy protests. Ban Ki-moon called on Iran to allow the UN Special Rapporteur on the situation of human rights in Iran, appointed last year by the UN Human Rights Council, to visit the country. He also called on Iran to outlaw juvenile executions, work to abolish the death penalty and comply with international standards on acceptable punishments. Finally, he reminded Iran that it had more work to do on women’s rights. In a clear reference to the recent quota restrictions announced by Iranian universities banning women from 77 fields of study, the UN Chief stated that women should have access to an ‘ever-broader’ range of professions and fields of study. Despite dozens of resolutions passed since the mid-1980s by the UN General Assembly and the UN Commission on Human Rights (UNCHR), Iran has failed to end chronic violations and end impunity for abuses. In 2002, the UNCHR discontinued the mandate of the Special Representative on the situation of human rights in Iran by a margin of only one vote, after Iran agreed to allow a visit to the country by the Working Group on arbitrary detention. But after that visit, Iran failed to implement the recommendations of the working group, and since 2005, has refused any further visits by UN human rights experts. United for Iran urges the international community and UN member states to heed this history, and demand measurable human rights progress before UN monitoring is revisited. Iran should demonstrate a track record of sustained and unfettered access by UN special procedures, beginning with the mandate of the UN Special Rapporteur on the situation in Iran. United for Iran urges the Secretary General to continue to use his good offices to secure Iran’s cooperation. United for Iran believes measurable indicators of human rights progress by Iran include:

To read the full text of the Secretary General’s speech, click here.