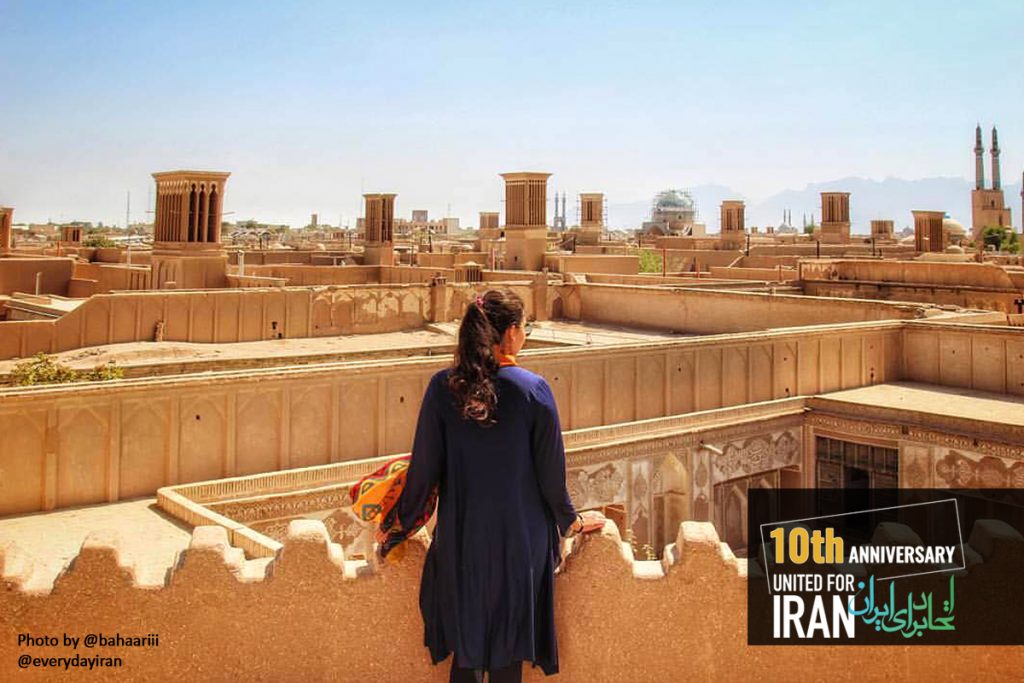 Ten years ago this month, United for Iran was born when over 100,000 of us decided to take to the streets around the world in 110 cities and stand up for the democratic demands of Iranians. The turnout for our protest far exceeded what we had hoped for and is still the biggest day of global solidarity in history for Iranian people.

Over the last decade, we have become a strong community of human rights defenders, activists, and most importantly, friends. We collaborate, support, and continue to push one another to achieve our highest goal of human rights in Iran. Below are some of what movement leaders and members of our community have said about us and our fight.

United for Iran is one of the most sincere and transparent human rights organizations out there. I have had the privilege of working with them since 2009 on a number of different events and projects. They have helped bring to light many injustices that have happened to innocent people in Iran who are merely trying to do good. It’s sometimes easy in the comfort of our lives to forget about all the difficult things people go through in a society where the most fundamental freedoms are not respected.

Consistent, clear, and comprehensive documentation of human rights violations is essential to the work of human rights defenders to advocate on behalf of victims and to hold governments accountable for what they do. Iran Prison Atlas has been used in the work of the UN General Assembly and my own reports for the Human Rights Council. It has been a very valuable tool to support advocacy for the victims and show more transparency and to demand accountability for violations being conducted by the government of Iran.

Human rights activism in a county like Iran is dangerous and we must reduce the risks. United for Iran shows how activists inside Iran can create a safer space for activism.

This work would simply not be possible without you. Individual support advances and sustains our programs — from tracking human rights abuses with the Iran Prison Atlas to developing technology to empower Iranians to better their lives through the IranCubator. Please consider making a donation to United for Iran.

There comes a day I’d take my kids to the “Iranian Freedom Movement Museum” in Isfahan and explain to them how U4I’s Iran Prison Atlas Project, international advocacy, and IranCubator project among many other works by a group of amazingly talented and dedicated people effectively helped Iranian Freedom Movement to succeed. I pride myself on being a minor part to some of these efforts.

If the last decade has shown us anything, it’s that there’s nothing inevitable about the democratizing force of technology on the world. If the Internet does ultimately fulfill the promise to make us safer, closer, and more free, it’ll be because pioneers like Firuzeh Mahmoudi focused our attention on correcting course. United for Iran embodies the same humility and audacity that I’ve admired in Firuzeh, and I’m continually inspired by their work.

What makes United for Iran remarkable is that it upholds an alternative vision of Iran, and perhaps, as importantly, this alternative is not an abstract idea. It is an actual capability: a collective vision negotiated in a creative, collaborative, and safe space in which Iranian (and non-Iranian) activists can learn, work, and act together. The model is simple, and it works.

Over the past ten years, I’ve seen United for Iran grow from a day of solidarity into a tour de force of innovative, collaborative and groundbreaking human rights activism. The U4I team, with Firuzeh’s empowering leadership, developed a brilliant model for advocates to provide meaningful tools and support to human rights defenders and civil society inside Iran.

—Jennifer Quigley, Director of Refugee Advocacy at Human Rights First, and United for Iran Board Member.

Working on human rights is not easy. You often feel lonely as an advocate. Untied for Iran has always stood out to me as a small welcoming community of loving advocates and professionals with a large network much beyond their startup office. To me, United for Iran is not just an organization or a selection of projects. It’s rather a momentum sustained to highlight human rights violations and empower those whose voices and perspectives often remain unheard or undermined. The team is casual and flexible. Yet the work is uncompromising when it comes to quality, rigor, creativity, and impact. I have witnessed Untied for Iran grow and find its voice over the years. What makes U4I’s journey beautiful is that it has emerged as a home for the passion, cause, and, dreams of many human rights advocates. The organization has simply led by example in community-driven advocacy, innovation, and activism.

— What United for Iran for ten-years has given Iranian human rights activists with big ideas is the support and platforms to bring those ideas to life. It started by bolstering to working of diaspora Iranians organizing protests but changed as needed. Just look at the Incubator program that allowed a bunch of grassroots activities to create high-tech civic-minded phone apps that have been used by hundreds of thousands of people inside Iran.

What makes me most grateful and proud of having worked for United for Iran for several years is how it has been an eco-system of love. There has of course been conflicts and differences of opinions and approaches as there would be in any healthy and open system. But they were dealt with open hearts and minds. Just the way I imagine the future of Iran will be.

When I first heard of Untied for Iran my reaction was of disbelief, so many times I’ve met people who promised to be working for a cause but never delivered on it. The next step was to travel to San Francisco to meet Firuzeh and the rest of the team, to see with my own eyes and to hear with my own ears what this new NGO was about. I can tell you that my heart became full of hope when I saw that the usual political strife, partisanship and the call to fame was not there. I only saw a few young energetic friends striving to build a coalition for the betterment of the world, starting with Iran. The love and commitment I saw with these great souls made me want to be a part of this project.

I haven’t gone too far to say that the chapter that was turned since I joined U4I was the greatest in my whole life. Every day at U4I taught me lessons in my career and also personal growth realms. I feel very lucky to have had the opportunity to work in one of the most loving and egoless environments that anyone could ever wish to work at. For me, U4I is a paragon of the possibility that different people and groups could collaborate on middle grounds and create impact rather than getting stuck in endless ideological conflicts.

Being a member of United for Iran was the most fulfilling and inspiring experience of my life. In these ten years and through its diverse projects, U4I has created a strong sense of solidarity among civil rights activists in and outside Iran. Additionally, it built a network to eco the suppressed voices of the freedom-loving Iranians. I deeply appreciate the work!

I wish I could describe my feelings for what United for Iran has done to help Iranian children in one paragraph. This organization has one of the most authentic and open-hearted team members that I have ever worked with. It was such a blissful experience for me to collaborate with an organization that works so hard to create awareness for our society.

The words of these advocates and colleagues mean a lot to us at United for Iran. We are so proud to have their support in our continued fight for human rights in Iran. Here is to our future work together