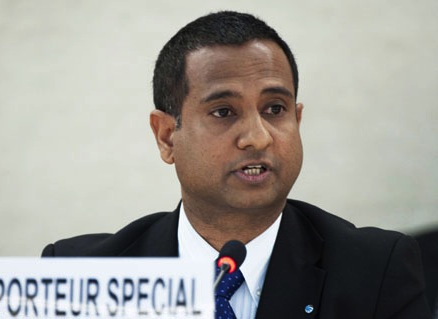 (October 12, 2012) – The Special Rapporteur on the situation of human rights in Iran, Dr. Ahmed Shaheed, has reported a “deeply troubling picture” of conditions inside Iran in a report submitted to the UN General Assembly this week. Shaheed notes that systemic and wide-ranging human rights violations in Iran are products of both legal incongruities and widespread impunity. The 23-page report, which is comprised of the testimonies of 221 individuals between November 2011 and July 2012, states that the failure by Iran to address “egregious human rights violations contributes to a culture of impunity, which effectively negates the protection offered by the country’s legal framework.” The Special Rapporteur called on Iran to immediately release all political prisoners and prisoners of conscience; to establish a moratorium on executions; to prevent discrimination against women and girls, including increasing the marriage age for girls to the minimum international standards; and to end its widespread misuse of so-called “national security” laws to incarcerate activists, political opposition, and other citizens simply engaging in free speech.  The Special Rapporteur also re-iterated his call for an extensive, impartial, and independent investigation into the violence following the 2009 presidential elections. Access to information and freedom of expression continue to be severely curbed within the framework of Iran’s Constitution, statutes, and legislation, including the current and proposed amendments to its Penal Code.  The Special Rapporteur expressed deep concern for a litany of these systemic violations and specifically called attention to the draft Penal Code, which treats “blasphemy” as a capital offense and strengthens the application of draconian “national security” laws used to try citizens that criticize the government. Currently, 19 netizens are detained in Iran; four sentenced to death.  In 2011, the Iranian government detained more journalists than any other country in the world; and since 2009, between 150-400 journalists are estimated to have fled the country for fear of persecution. The Special Rapporteur expressed alarm over the Computer Crimes Law, Cybercafe Law, and Press Law, which reflect efforts by the government to restrict access to information, and curtail and closely monitor their citizens’ speech.  Escalating restrictions on news outlets by the government, as noted in the report, include recent prohibitions on reporting on the impact of sanctions. The Special Rapporteur asserts that Iran’s Constitution is in violation of the International Covenant on Civil and Political Rights, as it fails to guarantee freedoms of expression, assembly, and association and serves to “primarily protect Government interests rather than the interests of Iranian citizens.” Increasingly, charges of Moharebeh and fisad-fil-arz (‘Enmity against God’, ‘Corruption on earth’, and various “national security” crimes) are used to try human rights defenders, journalists, political and cultural activists, and ethnic and religious minorities. In developments the Special Rapporteur deems to have “grave implications” for Iran’s judicial system and legal community, at least 32 lawyers have been prosecuted and the Bill of Formal Attorneyship now allows for Government supervision over the Iranian Bar Association, including the power to issue and revoke attorney’s licenses. Findings in the report additionally highlight significant abuses of those individuals detained or imprisoned. Human rights defenders, lawyers, activists, journalists, and political opposition members are subjected to unfair trails, harsh prison sentences, and inhuman conditions. In order to solicit forced confessions or gather information, government officials have reportedly subjected Iranians to prolonged solitary confinement, sleep deprivation, denial of food or water, threats to family members, severe beatings, mock hangings, electrocutions, rape, and being drugged with hallucinogens. Moreover, the report identifies “disturbing trend” with regard to religious freedom in Iran. Members of religious minorities have reported intimidation, arrest, and in some cases, physical and psychological torture. Some 105 members of the Baha’i Community are currently imprisoned due to their faith; 300 Christians having been arrested since 2010; and at least 200 Gonabadi Dervishes have been arrested in 2012. The Special Rapporteur also finds that Iran continues to systematically violate the rights of women and girls, in stark contravention of international law and standards of gender equity.  In fact, discrimination and inequality are pervasive in Iran, where a woman’s testimony in court is half the value of a man’s, and the value of her life is disgracefully regarded as half that of a man’s. The report expresses concerns about efforts within Parliament to repeal Iran’s law which prohibits marriage under the age of 13. More troubling still, the Special Rapporteur cites that over 75 girls under the age of 10 were forced to marry much older men in the months of June and July of this year alone. Finally, the Special Rapporteur expressed concern about the dismal state of economic, social, and cultural rights in the country.  Labor rights have been severely curtailed, and any effort by labor rights activists to organize has been met with severe penalties and violent repression. Currently all labor unions are banned in the country. In addition, the right to education continues to be violated with some 396 cases of deprivation of education for students that have been involved in student and civic activism. Ahwazi Arabs, Azerbaijanis, and Kurds also continue to face persistent discrimination, including in the development of their regions, cultural and linguistic development, and equal access to social services such as education. United for Iran welcomes the report by the Special Rapporteur and reiterates his calls for the Iranian government to address the widespread and systematic human rights violations in the country, including steps to end impunity.  United for Iran further echoes the Special Rapporteur’s demands for Iran to comply with the full range of UN human rights mechanisms, especially the country mandate, as well as all thematic rapporteurs—none of which have had access to Iran since 2005. United for Iran additionally urges the Iranian government to cooperate with the Office of the High Commissioner for Human Rights, the UN human rights treaty system, and to implement recommendations of the universal periodic review process, including the establishment of a National Human Rights Institute that meets the Paris Principles outlined in UN General Assembly Resolution 48/134 of 1993.