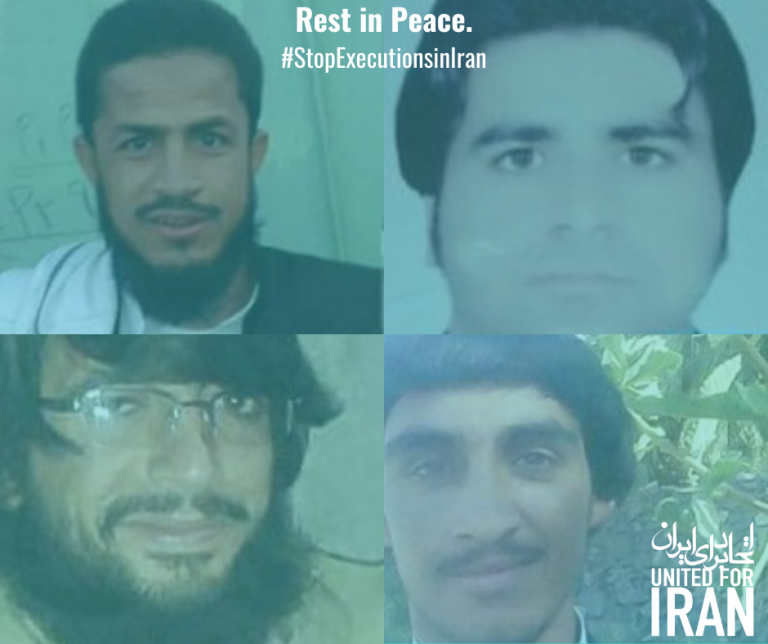 At least seven Balochi political prisoners were executed in the Islamic Republic of Iran (IRI) between December 26, 2020 and January 3, 2021. United for Iran unequivocally condemns these executions and reiterates the IRI’s obligation under international law to uphold the right to life, liberty, and a fair trial. These executions were carried out mere weeks after the highly publicized execution of dissident journalist Ruhollah Zam in early December, revealing the IRI’s continued use of the death penalty as a politcial tactic to suppress dissent.

United for Iran’s Iran Prison Atlas (IPA) researchers report that several political prisoners were silently executed in recent weeks, many of whom are still unidentified. However, they confirm that among those executed are: Abdolhamid Mirbalouchzehi, Hamid Rast Bala, Kabir Saadat Jahani, Mohammad Ali Arayesh, Hassan Dehvari, and Elias Ghalandazehi. All of these prisoners were arrested and sentenced without due process, including lack of access to a lawyer, and  coerced into making false confessions after being subjected to severe torture.

Abdolhamid Mirbalouchzehi was executed on December 26 on the charge of “moharebeh” (enmity against God). IPA researchers report that he was first arrested in 2015 and initially sentenced to 15 years in prison. He was later sentenced to death in 2018, but there is no public information about his case.

Hamid Rast Bala, Kabir Saadat Jahani, and Mohammad Ali Arayesh were executed on December 31 on the charge of “baghy” (violence against an Islamic ruler). These men were originally arrested in 2015 and accused of being members of the Sunni militant group Ansar Al Furqan. However, these charges were never proven in a fair and open trial. Instead, the men were physically, sexually, and psychologically tortured into making false confessions.

Hassan Dehvari and Elias Ghalandazehi were executed on January 3 on the charge of “baghy” as well. They were originally arrested in 2014 but contested the charges against them, claiming that their arrest was a retaliatory and coercive measure against their relatives who were deemed “fugitives” by the IRI. During their detention, they were severely tortured, held in prolonged solitary confinement, and forced to make false confessions.

IPA researchers have also learned that the IRI plans to execute three more Balochi prisoners imminently. Amanollah Balouchi (also known as Amin Mirbalouchzahi), Abdolrahim Kohi, and Javid Dehghan were arrested in 2015. Balouchi and Kohi were convicted of “baghy,” and Dehghan was convicted of “moharebeh.” They were sentenced to death, and the Supreme Court refused to review their sentences on appeal. They were also severely tortured, held in prolonged solitary confinement, and forced to make false confessions. United for Iran calls on the IRI to immediately halt these executions and to ensure that all prisoners are granted due process and a fair trial, especially in cases that involve the imposition of the death penalty.

United for Iran reminds the IRI of its international legal obligation to respect and uphold ethnic, religious, and linguistic minority rights, such as those enjoyed by the Balochi community, and calls on the IRI to end its use of executions as a tool for repression.