This article was originally published by Forbes.

In response to the day-to-day violence and legal limitations facing many women in Iran (and beyond), a new app aims to put the power and tools for creating real change in a safe, accessible format, and into women’s own hands.

Now available free for Android (and iOS soon), Toranj is designed to quickly connect victims of domestic violence with the resources and support they need to be safe, both in the moment and long term.

Like the popular safety app Circle of 6, which was first developed to combat sexual assault on campuses, Toranj lets users reach out to a group of trusted contacts during emergencies with just a few taps to a user’s smartphone. Depending on the situation, users can choose from various pre-written text messages to simultaneously ask their available friends or family to come and intervene, call the police, or take other steps of assistance.

The app also offers various social and legal tools for helping to women protect themselves and their families–even ones designed to ensure the health of their relationships and careers down the road. That includes made-for-mobile educational resources, a legal support handbook, tools for self-assessing romantic relationships, and a database of free counseling centers and pro-bono law firms.

In Iran, where almost two thirds of married women reportedly experience some kind of abusive behavior at home, the app has already been downloaded over 40,000 times within a few months of launching. 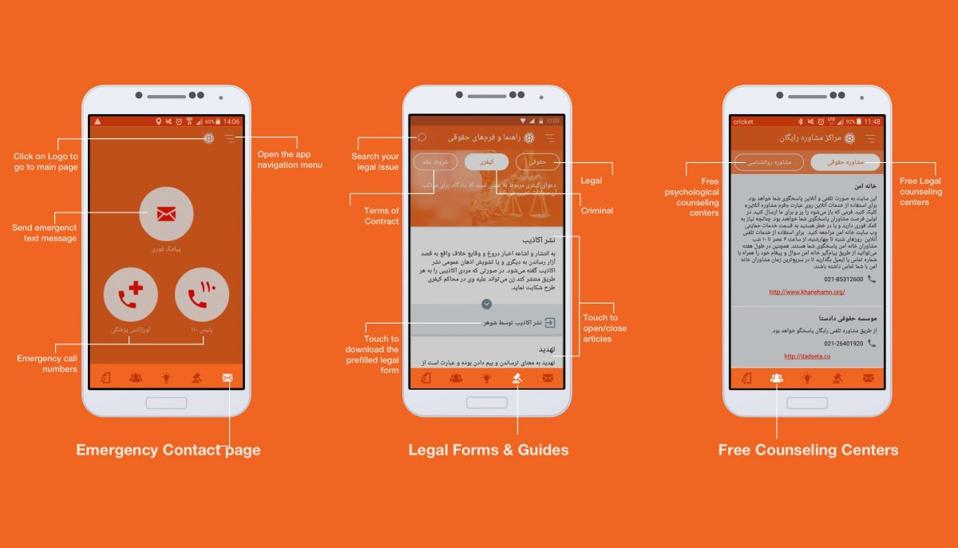 Toranj is the latest product of the nonprofit NetFreedom Pioneers, which aims to give the people of Iran and elsewhere access to information and outreach through high-tech solutions that can be used with ease. In the case of Toranj, which seeks to empower women in their struggle for gender equality, the group’s website notes that user-friendly technologies are “vital to providing support to at-risk individuals and raising awareness about their rights.”

Shadi Sharifi, Project Manager for Toranj, explained in a Skype interview that her experience working with women in Iran was what drew her to the project, and what inspired the inclusion of social, legal, and educational content in the app.

“As a lawyer practicing family law for four years in Iran, I had seen case after case of female victims of domestic violence and abuse at the hands of their husbands,” Sharifi said.

She pointed to the results of numerous studies on domestic violence in Iran conducted since 2000, which suggest that as many as two thirds of the country’s women see domestic abuse in their relationships. According to a 2013 survey, 63% of women in Iran have experienced such violence, including 58.8% who saw emotional abuse, just over 34% who saw either physical abuse or sexual abuse from their husbands, and 12.2% who reported that their abuse had become life-threatening.

Research conducted by Iran’s Vice President for Women and Family Affairs between 2001 and 2003 also suggested that 66% of married women in Iran had been subjected to either physical, psychological, sexual, verbal, legal, mental, educational, or economic and financial abuse at least once. According to researchers, likely fewer than 40% of such victims report their abuse to law enforcement.

“What made matters worse was the lack of social education and the disregard for this type of behavior that permeate a self-inflicted ignorance within Iranian society, and which helps perpetuate a pattern of misplaced justification for abusive partners,” she commented. Meanwhile, Sharifi said, “The majority of my clients were uneducated, and didn’t have enough general knowledge about domestic violence.”

In addition, she said, Iran’s family laws mean that women can’t obtain a divorce, leave the country, or even continue their education without permission from their husbands. As a result, women who face violence at home too often don’t have the information or support they need to recognize and push back against abuse or to build a better life and safer situation for their families.

Sharifi, who came to the U.S. as a refugee and resides in Los Angeles, said she hopes to continue helping Iranian women find the social and legal support they need to push for better lives and gender equality with Toranj. And thanks to the (mostly) universally loved format of mobile apps, she can now do so at scale.

See also: The Results Are In: Women Are Great For Business, But Still Getting Pushed Out 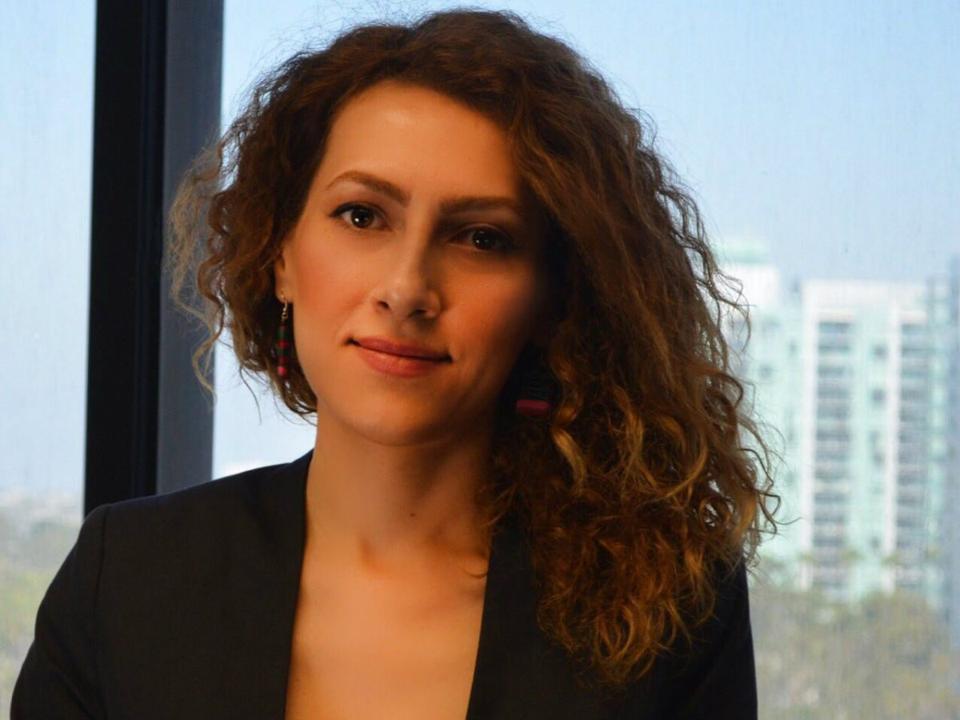 As Sharifi explained, all of the resources within the app are already provided or allowed by Iranian law, and are simply compiled in an app to make the task of accessing them a lot more streamlined. That includes its roster of local and pro-bono experts and educational articles about how to handle certain situations at work, home, and elsewhere.

The app’s legally recognized resources also include a tool for preparing a prenuptial agreement on the user’s behalf, which–if signed by her betrothed–will allow her the freedom to work, study, seek divorce, or leave the country without his permission. Without such an agreement, Sharifi said, women have few options for legal recourse if they’re later denied these rights by their husbands, and are especially limited when it comes to justifying cause for divorce.

“Under some circumstances they can separate from their husbands, like if the husband has been gone for years, or a wife can prove he’s not providing her cost of living, but it’s very difficult,” she said. As a result of such hurdles, previous clients of hers who suffered physical abuse for years–in one case, with a being beaten until she lost her pregnancy but unable to prove it in court–found themselves trapped by social and legal boundaries.

One of Sharifi’s biggest goals today with Toranj and her other work is to educate the Iranian public to “take seriously, see it as abuse, and treat it as such,” she said.

She and her team also hope to roll out an iPhone version of Toranj soon, and even to expand the app into English and other languages–that is, “if we find enough donors,” she said. “We think neighboring countries in the region could definitely benefit from the app,” Sharifi added.

So far, feedback on the app from communities in Iran already suggests that women in Sharifi’s home country find Toranj seriously beneficial in their push for rights, personal safety, and gender equality.

Perhaps because, while multipurpose mobile apps are all well and good (especially when harnessed for social change), the most powerful support that women can receive is that of fellow women, near and far, who can share their burdens, believe their struggles, and–together–help them help themselves. 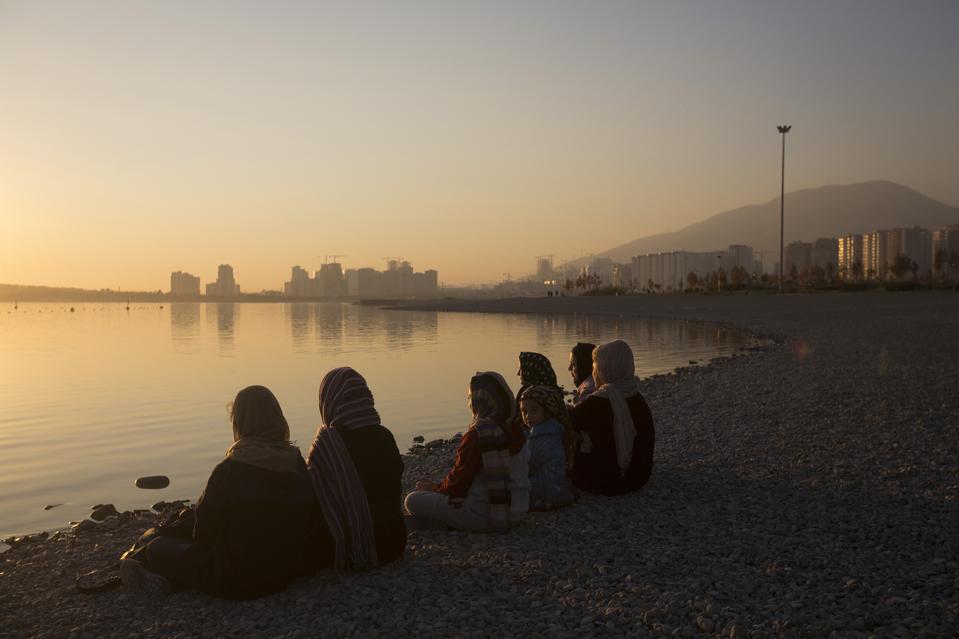 A group of women sit on the shore of an artificial lake in Chitgar Park, north-west of Tehran, Iran, on Wednesday 25 Nov., 2015. (Credit: Simon Dawson/Bloomberg)