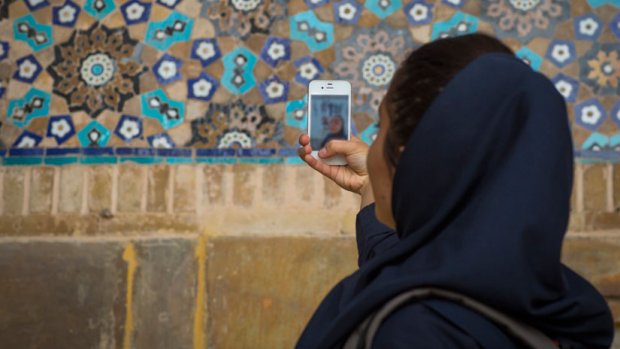 This article was originally published by The Debrief.

Here, in the UK, we don’t think twice about logging in to Facebook to message our friends, or clicking on an app to order a Sunday evening hangover take away or watch film clips on our way home from the office. For young people in Iran, however, things are very different. The Apple App Store has allegedly removed Iranian iOS apps, and there’s no official app store in the country, while many major sites that we use to communicate every day like Facebook and Twitter, are officially banned.

Despite this censorship, Iranians – especially younger ones – are extremely tech-savvy, and many young Iranians have learned to circumvent the blocks by using VPNs to get online.  There are 40 million smartphone users within the country, and 80% of these use Android phones (partially due to the lack of an Apple App store). Internet speeds have increased tenfold in the past few years too. Instagram is extremely popular (I can always count on guaranteed likes from all my relatives who still live there) and 20 million people in Iran use the encrypted instant-messaging service Telegram to speak to and share content, with family and friends.

Now a tech organisation based in Silicon Valley – United 4 Iran – are looking to capitalise on this and improve the lives of young Iranian people through apps. Director Firuzeh Mahmoudi founded the group in 2009 – a year that saw a series of protests in the Middle-Eastern country due to a belief that the result of the election was fraudulent.  Many people who attended the demonstrations – a lot of them university students – were arrested. In response to this United 4 Iran launched a database called the Iran Prison Atlas, which documented every political prisoner within the country.

Following the success of the Prison Atlas, IranCubator – a global contest where the best app ideas to help Iranian people would be developed by technology specialists – was launched by United 4 Iran. ‘Our aim is to improve civil liberties and human rights in Iran,’ Co-director Reza Ghazinouri, who had to leave the country following his activism there, tells The Debrief. ‘Technology is the tool we use to engage and empower people in the country.’ The organisation is specially placed for their work, as they have a wide network of activist contacts in and outside Iran as well as the Silicon Valley tech expertise.

Two of the IranCubator’s most recent apps are specifically targeted at Iranian women. Hamdam (named after the Farsi word for companion), a period tracker that also provides easily accessible information on topics such as sexual health and contraception, checking your breasts for lumps and sexual harassment, was released two months ago. Since then, Ghazinouri tells me, it’s been one of the IranCubator’s most popular apps, with over 20,000 downloads. Ninety-five percent of these are based in Iran and it’s mostly millennials who utilise it – 27.5% users are people aged 18-24, while 33.5% of users are aged 25-34.

The idea came from Soudeh Rad, an Iranian activist currently living in Paris. She came up with it after feeling that the information available to Iranian women was ‘biased, heteronormative and male pleasure-centered.’ The app itself is a ‘trojan horse’, labelled as a period tracker but also including information on women’s rights that they can’t easily get elsewhere.

Their other female-focused app, Toranj, had its final launch a month ago, and there have been around 3,000 downloads in that time. ‘Toranj is designed to help women against domestic violence,’ Ghazinouri says. ‘The way it functions is that with a couple of discrete clicks a woman can let her network of trust know that she is in a situation and needs someone to pick her up or call the police, and she can share her location she’s sending a text from over GPS, so her friends and family can easily come and help.’ It also includes a list of questions that can help you work out if you’re in an abusive relationship.

‘Another function it has is one that helps women get an easy divorce,’ Ghazinouri adds. ‘In Iran marriage is not equal for women. When they get married, based on the normal licence women are given, they don’t have the right to file for a divorce easily or get-go outside the country without their husband’s permission. Through Toranj we provide women with an easily-accessible text to help them with any forms if they need to go to court to make their lives easier.’

Both apps can be downloaded via Google Play, and Ghazinouri says they’ve been extremely well received, having ratings of 4.5/5 on the store. ‘Google Play technically isn’t blocked in Iran, but some users say they can have errors when downloading them. So we also allow people to download our apps through the Telegram channels and other web services, such as Amazon’s web service.’

I am concerned if women will get in trouble for downloading these apps, but a spokesperson from United 4 Iran’s communications team reassures me, saying that all of their apps go through ‘vigorous security checks’ and that they don’t save detailed user information, only the bare minimum. Though some hackers within Iran have targeted United 4 Iran’s employees, their apps are in safe hands. IranCubator uses an independent firm in Berlin, Cure53, to run a test which first looks for vulnerabilities a hacker could exploit, then recommends security fixes which Unite 4 Iran implement before releasing the apps.

‘We also strongly recommend people use password-protected devices,’ Ghazinouri adds. ‘But Hamdam and Toranj are not illegal, they are not a crime to have it on your phone and they aren’t politically sensitive. Our most recent app was a bit more tricky.’ He is referring to Sandoogh96, a Tinder-like application that allowed people to download unfiltered information about the presidential candidates and parties in this year’s 19 May election and answer questions about their views on issues such as the economy, women’s rights and foreign policy in order to match them with who they should vote for. Another section reviewed every Iranian president and his relationship with the Supreme Leader since the Iranian Revolution.

‘For users who read the stories it’s completely fine, but you can be arrested for contributing to such an app – and then you’re really in trouble,’ Ghazinouri says. ‘That is why all the people who have worked on that app are outside the country.’

When I interviewed Ghazinouri for this piece, the result of last week’s election had not yet been announced. It was between the incumbent, reformist Hassan Rouhani who is seen as being a lot more forward-looking, and hardliner Ebrahim Raisi, who was supported by many of the country’s clerics. ‘If they win the election, the country will look a lot different. They have already been advocating the blocking of the remaining unblocked social media outlets and they have put a lot of pressure on the Minister of Communications to not make internet speed faster. If they get into office things are not going to be easy for us,’ he admitted.

However, Rouhani won in a landslide victory, thought to have been down, in part, to the large numbers of women and young people voting. This could potentially see women having increased rights in Iran. During his first term, Rouhani clashed with the country’s morality police, who enforce strict punishments on women’s dress. Many women are even hopeful there could be a move towards the end of the compulsory hijab.

And what’s next for United 4 Iran and the IranCubator themselves? ‘We are very excited about how things are going with the apps, and the attention they’ve received,’ Ghazinouri tells me. ‘One of the things we are going to release next is a game for children that allows them to talk about sexual harassment, which we’ve discovered through our research is a problem. Some children are harassed at school or by family members, and we want to help them find a way to be able to communicate such matters to adults. We are currently working with an artist on the storyline, designing all these characters. Ultimately, our goal is to give Iranian people access to that information that really matters to them.’