On Anniversary of Arrests, United for Iran Calls for the Immediate and Unconditional Release of Political Prisoners 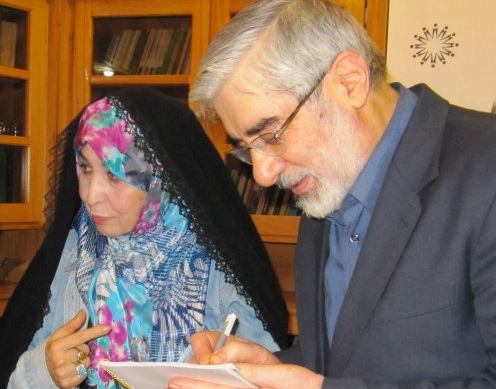 (February 14th, 2013) – Two years ago, Iranian authorities placed prominent opposition candidates Mir-Hossein Mousavi, Mehdi Karroubi, and their wives on house arrest, in violation of their most basic human rights. The Government detained these individuals following the staging of opposition protests in solidarity with pro-democracy movements in the Arab world. Absent due process, Iranian officials have kept these opposition figures in isolation and incommunicado from the Iranian public ever since, without so much as charging any of them with a crime. United for Iran urges the Iranian Government’s immediate and unconditional release of Mousavi, Karroubi, and their family members, along with the full range of political prisoners who are being arbitrarily detained solely as a result of exercising their fundamental rights. United for Iran has documented at least 500 political prisoners who are currently languishing in prison, with the total number likely much higher. United for Iran welcomes the action taken earlier this week by three key United Nations experts on human rights. The Special Rapporteur on the situation of human rights in Iran, the Special Rapporteur on the rights to freedom of peaceful assembly and of association, and the Chair-Rapporteur of the Working Group on Arbitrary Detention called for the immediate release of Mousavi and Karroubi and expressed deep concern about the recent arrests of Mr. Mousavi’s two daughters. Zahra and Nargis Mousavi were detained on Monday after speaking out about their parents’ house arrest. With respect to the upcoming elections, Dr. Ahmed Shaheed, the Special Rapporteur on the situation of human rights in Iran, importantly urged “the Government to facilitate a transparent and open environment for the election by releasing opposition leaders and allowing the media to effectively and independently report, without being harassed, threatened, or arrested. Continued restrictions of this kind will undermine the inclusiveness and fairness of the future presidential elections.” The Special Rapporteurs also noted that, as a signatory to the International Covenant on Civil and Political Rights (ICCPR), the Iranian Government has an obligation to protect its citizens from arbitrary detention and to uphold their rights to due process. The ICCPR further guarantees the equal rights of all citizens to the conduct of free and fair elections, public service, and public affairs. Until the Iranian Government demonstrates measurable progress in adhering to its obligations pursuant to the ICCPR and other international human rights covenants and declarations—including the release of political prisoners—the international community has a responsibility to hold the Government accountable for its violations. United for Iran looks forward to this crucial engagement from the global community in advance of the June 2013 Iranian elections.