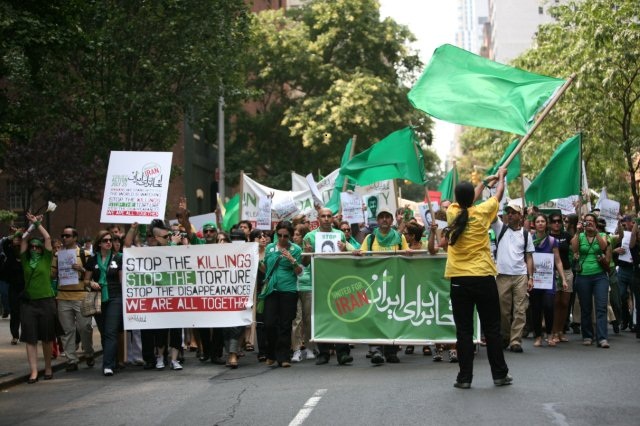 United for Iran began in the summer of 2009 as a cry from the heart. During the events following the disputed presidential elections, the world witnessed the heroic struggle of a people who ventured their all in the hope of gaining the freedoms fundamental to every human being. We watched in horror the unimaginable violence that was unleashed against them. Some of us who could not bear to witness these events in silence organized a grassroots global day of solidarity. With no resources, we began to tell the stories of courage and sacrifice, and asked those who cared to join us.

This non-partisan and independent space attracted thousands of people of all nationalities to our cause. In 110 cities across the world, people of every race and creed took to the streets in support of this historic quest for freedom. Our cry from the heart turned into the largest international demonstration of support for the human rights of Iranians.

Three years later, we continue. United for Iran has become an independent non-profit advocating for an end to human rights violations and supporting the movement for genuine democratic reform in Iran. We believe that defending human rights is the responsibility of every citizen, and that everyone has a role to play. We advocate in capitals and at the UN to ensure that human rights are a priority in diplomatic agendas in order to achieve international pressure and affect reforms. Our accomplishments include:

Thanks to you, there is cause for hope. The situation of human rights in Iran is becoming more pressing internationally. In 2012, UN Secretary-General Ban Ki-moon stated, “The United Nations and the international community are fully behind the people of Iran in your long struggle for democracy and human rights.” Nasrin Sotoudeh and Jafar Panahi won the prestigious European Union Sakharov Prize this year. Recent UN resolutions have passed with wide vote margins and stronger language. Read about yesterday’s UN General Assembly vote here. In 2012, more Iranian human rights violators have seen their bank accounts frozen and freedom to travel restricted by the United States and the European Union. While these pressures have begun having an impact and moving a global agenda around human rights promotion in Iran, there is still much more to be done. On June 14, 2013, Iranians will once again take to the polls. In the months ahead, we must stand with one voice and call on the Iranian Government to free political prisoners and allow for a free and fair election, without ideological vetting and open to independent observation. With persistence there is no doubt that we can make a real difference. We are making great strides in advocating for human rights in Iran and your support allows us to sustain this important work. Become a monthly donor and invite your friends and family to join. Simply put, our success depends on our partnership with individuals like you. Your contribution will allow us to sustain and build on this important work and it demonstrates that we, the Iranian diaspora and international community, share a vision of an Iran where every person enjoys the highest degree of personal and political freedom. Join our efforts and donate today. “To Iranians abroad, and indeed all people: our lives and future are intertwined. Use your freedom to demand theirs.” Nobel Peace Laureate Archbishop Desmond Tutu in his message of support to Iranian people in June 2012.