Iranian Women Won More than a Medal at the Olympics 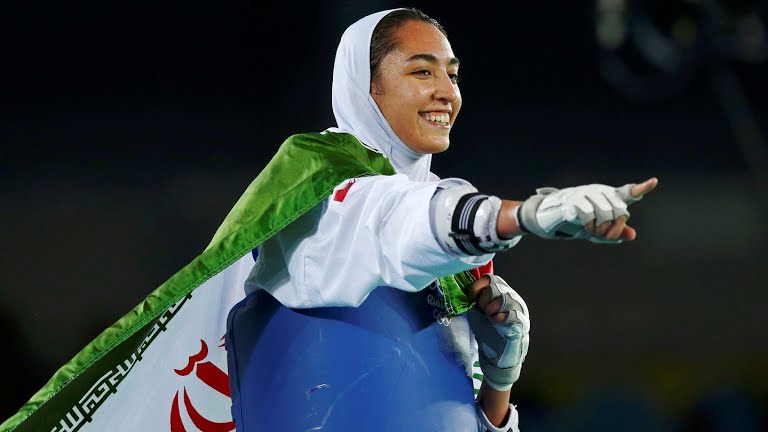 As the world watches the 2016 Rio Summer Olympics, it is clear that this year’s games boasts not only incredibly talented athletes who dominate their sport, but also sportsmen and women who are literally making history.

From Simone Manuel’s gold-winning and world record-breaking performance in the women’s 100 meter freestyle, making her the first African American woman to win an individual swimming event, to the debut of the first-ever Olympic refugee team (a recognition of the 60 million refugees in the world today), the Rio Olympics have been a vehicle for social change.

In fact, breaking barriers and protesting social issues have long been a part of the Olympic tradition. In the 1908 London Olympics, the American shot putter and flag bearer Ralph Rose refused to dip the American flag before King Edward the VII, a policy continued by the US team to this day. At the 1968 Mexico City Olympics, American track and field Olympians Tommie Smith and John Carlos raised their fists on the medal stand protesting racially discriminatory policies in their home country. At the 2014 Sochi Olympics, LGBT athletes and allies spoke out against Russia’s anti-gay policies and staged protests that ranged from large demonstrations to kisses with their same-sex lovers after winning Olympic gold.

Since 1979, Iranian women have been prohibited from attending football matches. That ban was extended to volleyball matches in 2012. What is worse, women who have protested this gender apartheid have been harassed, arrested and imprisoned. In 2014, the Islamic Republic made its opposition to the presence of women in these public spaces clear when it arrested Ghonche Ghavami, a British-Iranian activist who had protested for equal access to a men-only volleyball match at Iran’s Azadi Stadium. She was arrested attempting to enter the stadium, charged with “propaganda against the state” and sentenced to one year in prison. She was held in prison for five months.

In Rio, Safai picked up Ghavami’s torch and helped shine a light on the Islamic Republic’s denial of fundamental human rights to women. By criminalizing women’s bodies and forbidding their attendance in men’s sporting events, the Iranian government is denying women access to public spaces.

The policing of Iranian women’s participation is not just limited to sports matches either: In the Northwest Iranian city of Marivan, bicyclists gather and ride through town every Tuesday night as part of a “vehicle-free” campaign. Last month, an Iranian religious leader declared that women biking was a sin, and for two weeks guards stopped female bikers from participating in the cycling event. Since the state-enforced religious edict came down, women and their allies have held multiple protests in Marivan demanding equal access‌ to the right to bike.

Of course, any form of public participation by Iranian women have to‌ meet the government-required dress code. All Iranian women, regardless of faith must adhere to hijab (modest islamic dress that includes the headscarf). For Iranian women who are not observant Muslims this means their access to public space has been forcefully limited.

However, despite all of the Islamic Republic’s efforts to keep women out of public spaces and sporting events, Iranian women refuse to end their fight, as they took center stage at the Olympic games in Rio this year.

Just last night, Kimia Alizadeh won the bronze medal in Taekwondo, becoming the first ever Iranian woman to win a medal. “I am so happy for Iranian girls because it is the first medal and I hope at the next Olympics we will get a gold,” she said.

Zahra Nemati is another inspiring story. Athletic from a young age, Zahra was a taekwondo prodigy. She took up taekwondo and while still a teenager qualified for Iran’s National Taekwondo Team. But life for this Olympic hopeful changed in an instant. When she was 18, a car accident left her with a spinal cord injury, and paralyzed her in both legs. But that tragedy did not put an end to Zahra’s Olympic dreams. She continued to press on with incredible determination and courage, winning the gold medal in archery at the 2012 London Paralympic Games, and qualified for both the Olympics and Paralympics in Rio. Zahra is, as one fan described, the epitome of the Olympics.

The International Olympic Committee (IOC) has made a public stance stating in its charter that it is “committed to the goal of equal participation by women in sport.” The IOC has set up the Women in Sports Commission to ensure its gender-equality policies are overseen and implemented.

Though a small and tacit gesture of solidarity, the IOC’s permission for Daraya Safai to hold her sign at the Olympics will be remembered by Iranian women fighting for their rights for years to come, and it sends a clear message to the Islamic Republic. It is now time for the Olympic Committee to put their words in practice and explicitly support those who object sports gender apartheid. Gender-equality practices must be encouraged and enforced both on and off the field. The ability for women to participate and watch sports is nothing short of a pressing human rights issue, and the IOC has a responsibility to ensure that female athletes and fans can participate in the sports they love.

As Kimia and her fellow women Olympians finish their competitions in Rio, they have become beacons of hope to many Iranian women, demonstrating that even in the face of extreme discrimination they can aspire to achieve more. But equally as important, Iranians are looking at how those who dare to ask for equality for women are treated in the International domain — as we look back on these Olympics and remember what we’ve protested and celebrated, we should remember Darya Safai alongside brave Iranian women Olympians.

In the same way that the 1968 Olympics has been remembered as a sign of the times — then the civil rights movement in the US, the Vietnam War, and South Africa’s Apartheid regime — the 2016 Olympics will be known for #BlackGirlMagic, Team Refugee, and for the brave Iranian women fighting for gender-equality and public access to sports.