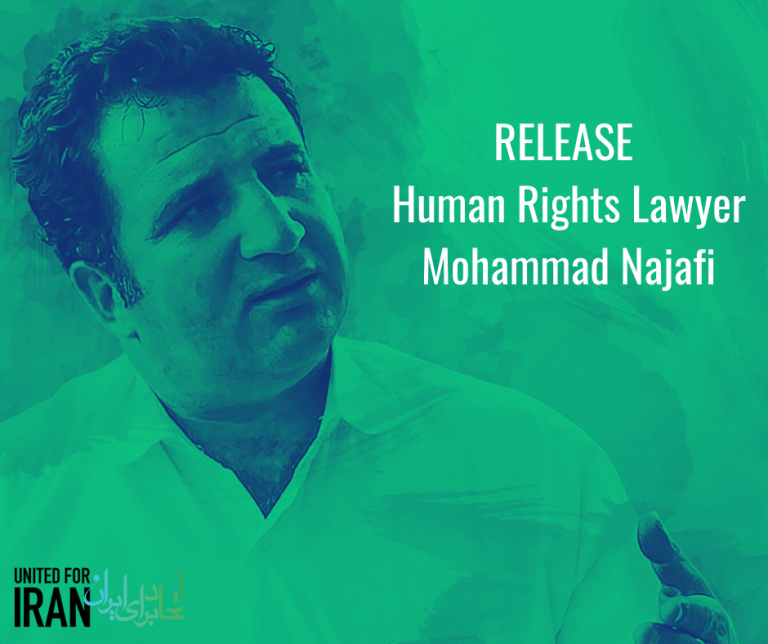 Iran has officially summoned Mohammad Najafi to return to Arak Detention Center after being allowed a two-month furlough amid the coronavirus pandemic. Najafi, a human rights lawyer, is facing criminal charges for his activism and criticism of the government. He has been sentenced to a total of 22 years and 10 months imprisonment, and a fine of four million Tomans, according to the Iranian security service’s latest filing.

But Najafi should have never been in prison to begin with. He is being punished for his long history of defending prisoners of conscience and speaking out against human rights abuses in Iran. Just last December, he received the Human Rights Award of the Year by the Council of Bars and Law Societies of Europe, along with three other esteemed Iranian lawyers: Abdolfattah Soltani, Nasrin Sotoudeh, and Amir Salar Davoudi.

His most recent detainment began in March 2019, but most of his arrests stem from mid-January 2018 when he objected on Facebook to the government claiming suicide was the cause of death of a young man named Vahid Heydari. Heydari died in prison after being arrested during protests that same month.

Najafi researched Heydari’s case, interviewing friends, witnesses, and family members. He concluded in his report that the government’s account of Heydari’s arrest and death was false. According to Najafi, Heydari was indeed arrested during the January 2018 protests in Arak and was found dead at a police detention center in the city, but with signs of abuse on his body. He concluded his death was not by suicide. The report angered security officials, who filed a criminal complaint against him.

After sharing his report, Najafi was detained from late February through April, but later released on a bail of one billion Tomans. A few weeks after his release, Najafi told the Center for Human Rights in Iran that he was arrested for pursuing the suspicious death of Heydari, but stated that he would nevertheless continue to pursue justice. He was also willing to represent Heydari’s family as their lawyer, if they wished, despite the Revolutionary Guard intelligence telling Najafi they would delay his efforts through endless summons and arrests.

Since then, Najafi has had at least seven prosecutions from 2018 to 2020, all seemingly borne out of this conflict. Human Rights Watch concluded that Najafi’s multiple long prison sentences were an act of “revenge for the revealing of Vahid Heydari’s death in the detention center and reporting signs of torture and other abuses, including bruises on his body.”

This has become standard in Iran, where human rights lawyers are routinely harassed and arrested by authorities simply for defending prisoners of conscience, or for criticizing the government or judicial system. Since March 2016, at least 17 lawyers have spent time in prison for peaceful expression, or for work on behalf of their clients. That doesn’t include the dozens more who have fled the country to avoid persecution.

The threat of arrest and criminal charges are part of a large pattern designed to erode the ability of lawyers in Iran to vigorously defend their clients or speak out against human rights abuses. Moreover, Iran’s Criminal Procedure law prevents defendants facing “serious charges” from freely choosing their lawyer and having a lawyer at all stages of the proceedings – lawyers often cannot get access to case files or their clients until just before trial, if at all. Authorities have even asserted undue control of the Iranian Bar Association by giving the Judiciary the power to disqualify independently-minded lawyers from standing for elections to the Bar’s Board.

Now, not only is Najafi wrongfully being summoned to return to prison, he is being put in harm’s way due to Iran’s horrific prison conditions and vast overcrowding, which greatly increases the risk of COVID-19 spreading among detainees. His family is particularly concerned because he has other health conditions, including diabetes.

The United Nations has expressed these same concerns around the spread of coronavirus due to dangerous overcrowding in detention facilities in many countries. UN High Commissioner for Human Rights Michelle Bachelet warned in March that, “Now, more than ever, Governments should release every person detained without sufficient legal basis,” including political prisoners and others detained simply for expressing critical or dissenting views.

Iran’s judicial and security officials must stop their illegal persecution of human rights lawyers and attacks on the legal profession. The imprisonment of Mohammad Najafi remains a violation of international law. He must immediately and permanently be released.

Mani Mostofi is the Senior Human Rights Advisor for United for Iran, an independent nonprofit based in the San Francisco Bay Area working for civil liberties in Iran.