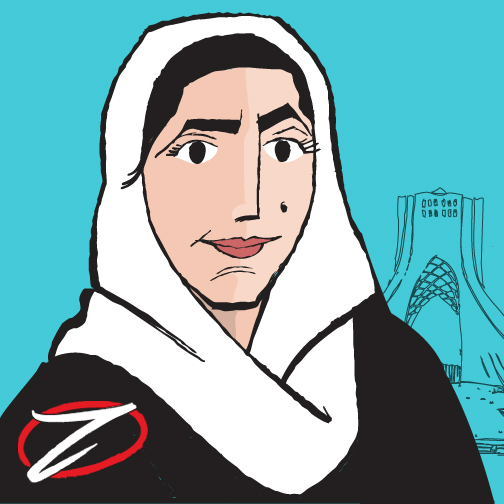 parham (8 May 2013) – Ahead of Iran’s presidential elections scheduled for June 14, an author and a human rights non-governmental organization are registering their protest by nominating for president a fictional mourning mother whose son was killed by authorities in 2009. Zahra, 52, will be the first woman to run as a virtual candidate for Iran’s presidency. “Zahra represents all of Iran’s grieving families. And like them, she knows that the personal is political,” said Amir Soltani, author of the graphic novel “Zahra’s Paradise.” “She is running on a human rights platform. She is running in the name of her son, Mehdi, so that future generations may enjoy the rights denied her son – whose fictional story is based on the real stories of thousands of Iranians.” The purpose of Zahra’s virtual campaign is to create a collaborative space for the voice, vote and vision of the Iranian people, Soltani continued. The campaign seeks to confront a corrupt and criminal theocracy—one founded on fraud, fear and force—by offering an antidote: an alternative candidate committed to advancing the movement for democracy, dignity and equality in Iran, a movement dating back to the constitutional movement of 1906, Soltani said. A teacher, poet and granddaughter of the late Grand Ayatollah Alavi, Zahra’s journey to find her missing son was depicted in “Zahra’s Paradise,” a novel inspired by real stories emerging from the Green Revolution of 2009. Zahra represents fearless critics of Iranian government, many who remain jailed. Soltani and the human rights NGO United for Iran are launching the “Zahra for President” campaign on the day that Iranian presidential hopefuls may begin registering their candidacy, from May 7-11. Registrants must await approval from the Guardian Council – an unelected body of 12 religious scholars and jurists – in a process that is a far cry from internationally accepted standards of “fair and free.” The goal of the Zahra campaign is to expose a corrupt and exclusive political landscape through satire, said Firuzeh Mahmoudi, director of United for Iran. Other human rights organizations endorsing the campaign effort include Arseh Sevom, Abdorrahman Boroumand Foundation, DaneshJooNews and Iran Human Rights Documentation Center. Activists around the world are sending in photographs of support: http://vote4zahra.org/the-campaign/support-around-the-world/ and will be asked to support Zahra’s platform of human rights and democracy with online and street actions organized by United for Iran (united4iran.org). “Zahra’s virtual campaign is a symbolic affront to the government practice of disqualifying women from running for president,” Mahmoudi said. “Zahra represents an Iran where human rights and democracy are afforded to all Iranians, and the resilient hope of Iranians who are committed to an Iran that is truly ‘fair and free’ – where every vote counts; where all qualified candidates can run for office; where all eligible citizens can vote without intimidation or coercion; and where opposition is not met with violence.” The campaign is a gesture of solidarity led from outside the country, with supporters inside Iran also emailing photos of themselves with printed images of Zahra – covering their faces for fear of retribution. Iran’s Green Revolution was the first in a stream of pro-democracy uprisings in the Middle East North Africa region. In the four years since, the Iranian government has arrested, jailed and tortured hundreds of Iranians dissidents. More than 500 known political prisoners remain imprisoned or under house arrest. “It’s been four years since millions of Iranians poured into the streets in hopes of making true democracy in Iran a reality,” Soltani said. “The government response was crushing. Today, Zahra is a manifestation of our protest of Iran’s rigged election system. We are using satire, art and activism to demonstrate our solidarity with the continued effort to win back democracy.” The June 14, 2013 presidential elections will be Iran’s 11th since the 1979 Islamic Revolution. Zahra’s online campaign launches today and is expected to continue past the June 14 elections. “Zahra’s candidacy will demonstrate through weekly illustrated panels released on the website Vote4Zahra.org that Iranian elections are not ‘fair or free,’” Mahmoudi said. “As a protest candidate, Zahra’s campaign will call upon Iranians and the international community to continue the fight for a truly democratic system that upholds human rights for all.” For more information on the campaign please visit: Vote4Zahra.org.