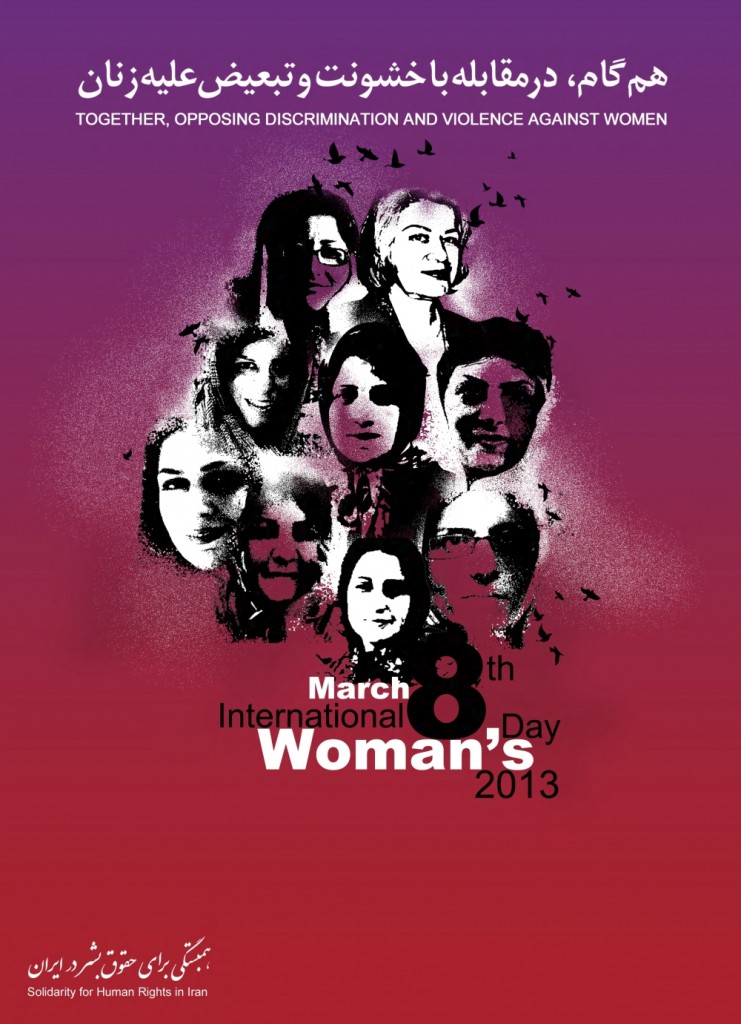 March 8, 2013 – On this International Women’s Day, United for Iran calls on Iranian authorities to put an end to their systematic assault on women’s rights.  As the Iranian movement for women’s equality persists despite severe suppression from the government, we also honor those  activists whose struggle to end discrimination comes at great personal risk.  Over the last three decades, the Iranian government has engaged in a deliberate campaign to roll back progress on women’s rights, status, and opportunity.  Countless women, including female activists and human rights defenders, are subjected to harsh prison sentences and corporal punishments simply for exercising their legitimate rights.  In recent years, the Iranian government’s attempts to diminish the role of women in public life have been put blatantly on display through its open efforts to restrict access to advancement opportunities and further eliminate basic rights. Particular developments over the last year point to deeply disturbing trends.  In January, Iran’s parliament passed a new Passport and Exit Law bill which severely limits the ability of women to travel outside the country.  It requires single women over 18 years old to obtain paternal permission in order to exit the country, while married women need their husbands’ permission for leaving the country and even simply possessing a passport.  Additionally, last August, 36 Iranian universities announced the implementation of gender-based quotas.  The new policies effectively ban women from 77 fields of study, including business management, political sciences, engineering, chemistry, computer science, religious studies, education, and English. In his recently released report to the UN Human Rights Council, the Special Rapporteur on the situation of human rights in Iran documents an increasing disparity gap in economic and political attainment as a result of these and other efforts by Iran’s officials. The Special Rapporteur has also deplored the situation of child marriage, noting that in June and July 2012 more than 75 girls under 10 were forced to marry much older men, as well as Iran’s revised penal code, which deems a woman’s testimony in court and the value of her life as half those of a man’s. These policies and practices come in stark contravention of Iran’s international human rights obligations, and in some cases, its own constitution.  Today, as the world recognizes the rights and invaluable contributions of women across the globe, we urge the Iranian government to end all forms of gender discrimination and respect the fundamental rights of women and girls.