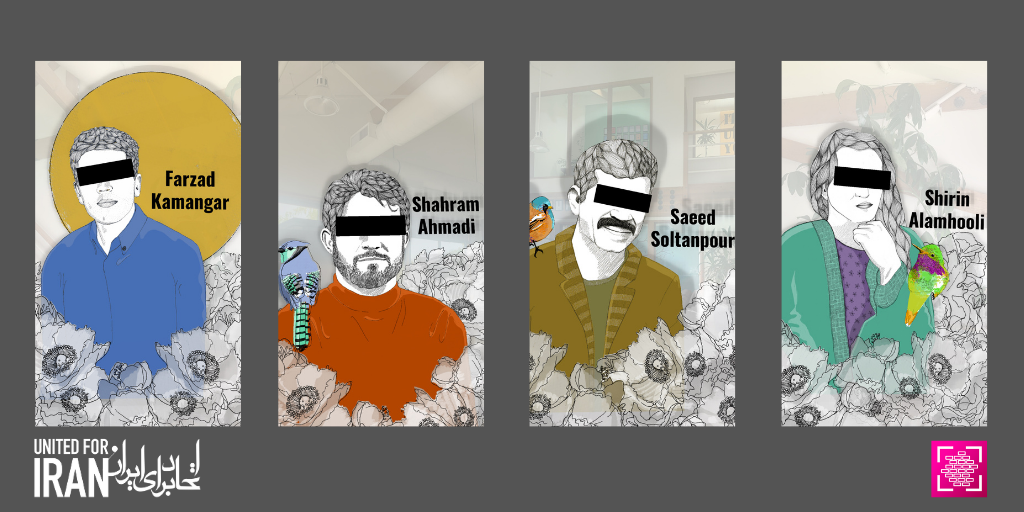 Executions of political prisoners and prisoners of conscience are once again on the rise in Iran. For over the last decade our response to these times of challenge have been the same — to share the stories of those wrongfully imprisoned, tortured, or executed, to generate awareness for their situation, and to hold those responsible accountable.

As part of that effort, this month, Hidden Faces released an Instagram filter for users to learn about 4 prisoners of conscience in Iran were executed through unfair trials for civic activities, political engagement, and the expression of their beliefs. The filter also allows users to imagine themselves in the same position with a selfie feature. The aim of the filter is to bring to light that any of us could be persecuted for our beliefs, and reminds us how important it is to continue fighting for human rights for the people of Iran and everywhere.

Saeed Soltanpour was executed on June 20, 1981, for refusal to participate in televised confessions in the interests of the Islamic Republic. Soltanpour was a poet and playwright who was known for the revolutionary and resistance themed style of his writings. He was imprisoned and tortured numerous times under the Shah’s regime, and was re-arrested at his own wedding and sent to Evin prison in the early years of the Islamic Republic.

Shirin Alam Hooli was executed on May 9, 2010, for cooperation with a Kurdish party after spending 21 months in prison. Upon her arrest, she was tortured repeatedly and interrogated in Farsi, which she was unable to speak at the time of her arrest. She was executed along with 4 other political prisoners (including Farzad Kamangar), without any prior notice being given to her lawyers or to her family.

Farzad Kamangar was executed on May 9, 2010, for cooperation with a Kurdish party. Kamangar was a teacher, social worker, and activist. Kamangar was repeatedly tortured as his interrogators sought a confession, but he maintained his innocence for the charges levied against him. His trial is said to have lasted no more than 5 minutes, and he was sentenced to death without evidence. He was executed along with 4 other political prisoners, including Shirin Alam Hooli.

Shahram Ahmadi was executed on August 2, 2016, for cooperation with a Sunni group. Ahmadi was an ethnic Sunni Kurd, and was known to take part in many religious and social activities which highlighted the government’s oppressive and unjust practices and policies. Although his death sentence was originally rejected by the Supreme Court, it was later reinstated by Judge Moghiseh, a notoriously harsh judge in the Iranian system.

We invite you to try the filter yourself by clicking on this link from your mobile phone, sharing your reflections on your Instagram story, and tagging us at @united4iran and @snuggleforsurvival. Thank you for helping us keep the memory of these activists alive, and helping raise consciousness about the ongoing tragedy of executions based on personal beliefs in Iran.