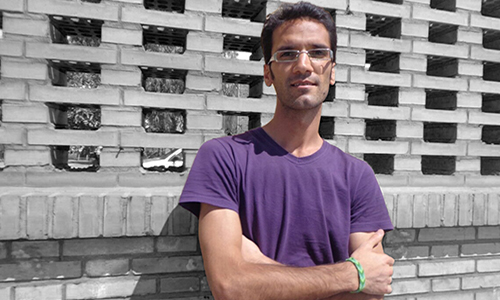 5 years ago my cousin Mehdi was arrested by the Islamic Republic of Iran.

Throughout the 2009 protests, Mehdi and I worked separately with student activists to organize protests and publicize human rights abuses by the government of Iran. Our actions led to threats and imprisonment by the Islamic Republic. Ultimately, I fled Iran, and was eventually granted asylum by the United States, where I continue my activism at United for Iran.

Mehdi stayed behind, and has been in prison since his arrest five years ago. For me and many others, Mehdi is a mentor and a hero, and he must be released immediately.

Mehdi had been an active board member of Human Rights Activists in Iran (HRAI), an organization known for exposing human rights abuses in Iran and supporting the families of political prisoners. In 2009, Mehdi was actively involved in pro-democracy protests as a key organizer for the student wing of HRAI. He also worked to produce and distribute human rights pamphlets publicizing abuses by the IRI. The government responded brutally, and over 30 members of HRAI, including Mehdi, were arrested. Ultimately, Mehdi was sentenced to 7 years in prison for “propaganda against the system.”

I cherish my childhood memories with Mehdi. As a teenager, everyone loved to spend time with him because he was always laughing and telling jokes. But Mehdi also had a deeply serious side, and once he made a decision changing his mind was not easy. Mehdi’s humor and determination have been his gift as a human rights activist and have kept him going during his time in prison.

Mehdi is not a criminal. His activities were peaceful, thoughtful, and aimed at improving the lives of individuals in Iran. Further, according to Iranian law he has been in prison too long. Changes to Iran’s penal code in 2013 should have reduced sentences for people like Mehdi, but the Iranian judiciary has chosen not to enforce these laws. We are simply asking the Iranian government to enforce its own laws.

I want to show the Islamic Republic that the world cares for Mehdi and activists like him. Time and time again we’ve seen how pressure from the international community can help political prisoners like Mehdi win their freedom. I’m asking for your support one more time.

Sign the petition for Mehdi Khodaei and ask Sadegh Larijani, Head of the Iranian Judiciary to release him.