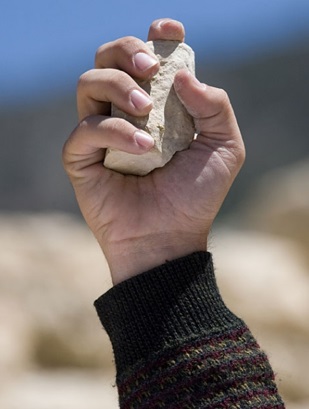 Geneva (26 June 2012) – Speaking at an informal meeting coordinated in tandem with the 20th session of the UN Human Rights Council, Ms. Elahe Amani presented on the need to stop stoning globally. The text of the speech has been reproduced below.

Thank you for inviting me for this briefing on MAPPING STONING, Stop stoning globally, and I am sorry that I can’t be there in person. This briefing at the United Nations Human Rights Council could have not been presented   on a more pertinent day.  Today, June 26th 2012, is the International Day against torture. The Convention against Torture and Other Cruel, Inhuman or Degrading Treatment or Punishment   was adopted by the General Assembly of the United Nations on   December 10, 1984 through resolution 39/46. This Convention entered into force on June 26, 1987. Global human rights agencies have long delayed responding to the spirit of international human rights treaties in taking a stand against stoning, one of the cruelest forms of torture that is used to punish men and women for adultery and other `improper’ sexual relations.   In light of the contemporary revival of extremist interpretations of shari’a law, the issues of gender and sexuality and the binary division of what defines “proper relations” calls for immediate, global attention to this antiquated practice. The practice of stoning should be banned under two grounds according to existing human right treaties and convention. First, under the International Covenant on Civil and Political Rights (ICCPR) and the Universal Declaration for Human Rights (UDHR), death penalties should only be executed for the most heinous crimes.  The consensus within the majority of the international community is that adultery is not a heinous crime.  Article 6(2) of the International Covenant on Civil and Political Rights, the relevant jurisprudence of the Human Rights Committee, and the 1984 Safeguards Guaranteeing Protection of the Rights of Those Facing the Death Penalty each specify that capital punishment may be imposed only for the most serious crimes.” Stoning has been recognized as a form of torture in various human rights treaties and many U.N. agencies have confirmed it.  Separate reports from the committees representing the Convention on the Rights of the Child; Convention against Torture and Other Cruel, Inhuman, or Degrading Treatment or Punishment; the International Covenant on Civil and Political Rights; as well as the Special Rapporteurs on Violence against Women ; Extrajudicial, Summary or Arbitrary Executions; and Freedom of Religion or Belief; and the United Nations General Assembly have all recognized stoning as a form of torture and/or cruel, inhuman, or degrading punishment. While globally the practice of stoning is carried out for both men and women; contextualizing the gender inequality, and discriminatory laws against women, stoning is often identified as a punitive form of ‘improper’ sexual relations by woman.  In 2006, eleven people were sentenced to death by stoning in Iran.   Of these eleven people on death row by stoning nine were women. The United Nations Convention against Torture defines torture as “any act by which causes severe pain or suffering, whether physical or mental; is intentionally incited on a person for purposes that include punishment for an actual or suspected crime initiated by a person acting in an official capacity.” Stoning surely fits this definition, as a slow, painful process by which the victim eventually dies by blunt impact injury and blood loss.  The reference to “a person acting in an official capacity” does not necessarily points to the state officials.  An argument can be presented that “official capacity” could reflect the decision and action of individual or groups in positions of power who are non-state actors.  These individual and groups sentence and carry out execution by stoning for compliance with Sharia law though extrajudicial methods.    We shall recognize the role of organized non-state actors such as militia etc.  who are often energized and supported by state in carrying out the sentences informally.   The notion behind this strategy is to create an environment of fear, threat and humiliation for sexual misconduct aiming to relieve state of its accountability.  Also, other than organized non-state actors, in isolated communities around the world, men who are in position of power are acting independently of the state, exercising their power to   carryout the inhuman act of stoning.  Saeedeh was stoned at the age of 14 by her father in Zahidan, Iran in 2008. Stoning is not receiving the deserved global attention with the “argument” that the practice  is not as widespread  as FGM and honor killings.   While the numbers of cases of stoning in the 14 countries where the practice still exist, one case of stoning is too many.   We, the global human rights community, women’s human rights defenders, gender activist are calling on the United Nations General Assembly to adopt a Resolution to ban stoning.   We, encourage all States to adopt and implement legislation to ban this cruel punishment and to take all necessary legislative, political and operational measures to bring an end to stoning. This year on March 8, 2012, at the conclusion of the 56th Session, the Commission on the Status of Women of the United Nations Economic and Social Council agreed to present the issue of female genital mutilation during it’s United Nations General Assembly 67th Session on September 18, 2012. “Honour crimes”, “FGM” and Stoning are often described as “tradition”   and unchanging facet of “culture.” While all these inhuman and cruel practices that violated the human rights of women to life, integrity and dignity, have a  cultural dimension and are also shaped by social factors,    UN resolutions, government policies, and institutional discourses can provide an encouraging environment for eradicating such inhuman and cruel practices A Resolution of the United Nations General Assembly banning stoning as one of the cruelest forms of death penalty and a form of torture will be a pivotal moment in the fight to bring an end to the practice.