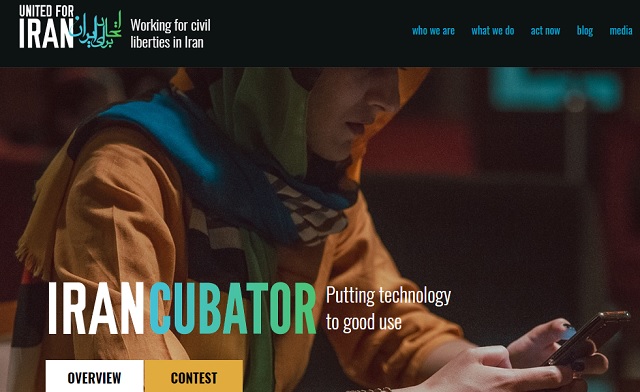 This article was originally published by siliconbeat.

Startup of the week:

What they do: It’s a tech incubator that produces apps focused on achieving social change in Iran, backed by Berkeley-based nonprofit United for Iran.

Why it’s cool: Launched three years ago, IranCubator matches activists with app developers to create technology that can change the lives of Iranian citizens. The program has launched a series of apps in recent months, including women’s health app Hamdam. Geared toward women who don’t have access to sexual health resources — women from conservative families or from rural areas, for example — Hamdam provides information on sexually transmitted diseases and contraception, and also offers the only Persian menstruation calendar, according to United for Iran founder and executive director Firuzeh Mahmoudi. And Hamdam offers resources to help women — who often aren’t granted the same legal protections as men — answer questions on marriage law, divorce, employment and more.

Another IranCubator app, RadiTo, lets Iranians listen to news programs blocked by the government, such as BBC Persian, as well as audio books and talk shows. That’s crucial in a country that has a reputation as being one of the world’s most restrictive regimes when it comes to accessing information — Reporters Without Borders this year ranked Iran 165th out of 180 countries in its World Press Freedom Index.

Where they stand: Women’s health app Hamdam, the incubator’s most popular app, has been downloaded more than 70,000 times since its launch in March.

Only in Silicon Valley:

Bummed out by shoes that don’t fit? Iovado promises to fix that problem by combining Silicon Valley technology with Italian fashion. Customers use the company’s app to take 10 pictures of their foot, which Iovado converts into a 3D model. That model is then sent to leather workers in Italy who use it to make a pair of handcrafted shoes built exactly to your specifications. The whole process costs 240 Euros, or about $274.

When considering whether to invest in a startup, venture capitalists question female founders differently than male founders, according to a recent study published in the Harvard Business Review. Investors are more likely to ask men about their potential for gains, and women about their potential for losses, according to researchers from Columbia University and the University of Pennsylvania, who analyzed interactions between 140 VCs and 189 entrepreneurs at TechCrunch Disrupt New York.

Sixty-seven percent of questions posed to male founders had to do with promotion — focusing on hopes, achievements, advancement and ideals, according to the study. On the other hand, 66 percent of questions asked of female founders had to do with prevention — they focused on safety, responsibility, security and vigilance. For example, VCs were more likely to ask men how they will acquire new customers, and ask women how they will prevent current customers from leaving.

Those lines of questioning make a difference, the researchers argue. The male-led startups they studied raised five times more funding than those led by women.

Following a string of female startup founders who have spoken out about sexual harassment they faced from male investors, entrepreneur Perri Chase this week addressed the more subtle nuances of the investor/founder relationship. In a blog post titled “I had sex with an investor & I am sorry,” Chase described a meeting over drinks with an angel investor she hoped would back her startup. When he started hitting on her, Chase wrote, it became clear that he hadn’t intended the interaction to be a pitch meeting. She says she “made a consensual choice” to reciprocate his advances.

“In all that has been emerging this week it dawned on me that I gave him permission to act this way,” Chase wrote. “My sleeping with him is actually part of the problem.”

But “it’s complicated,” Chase wrote, adding that in a world where it’s common to meet investors over happy hour, the line between professional and social interactions can become blurred, and clarifying it needs to become a priority.

Photo: A screen shot from the United for Iran website.