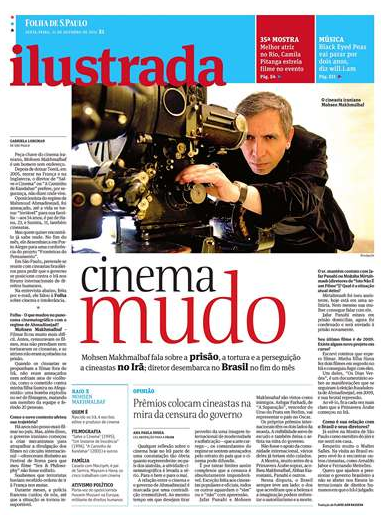 Flavio Azam Rassekh and other Brazilian human rights activists regularly organize speaking tours throughout Brazil. Below are the details of the upcoming event, which was published on the front page of the cultural section of Folha de San Paulo, the leading Brazilian newspaper. Iranian filmmaker/activist and two time winner of the Cannes Film Festival, Mohsen Makhmalbaf will be in Brazil for a one week human rights tour, talking about violations in Iran and the crackdown on filmmakers and educators. The upcoming event in Brazil was featured on the front page of the cultural section of Brazil’s leading newspaper, Folha de San Paulo. In two recent interviews, Mr. Makhmalbaf highlighted the situation of filmmaker Jafar Panahi, Mojtaba Mirtahmasb, and of the Bahái teachers in Iran who each received prison sentences of 4-5 years. Mr. Makhmalbaf will also meet with Brazilian filmmakers Walter Salles, Fernando Meirelles, and Arnaldo Jabor to discuss Brazil’s position at the UN towards the government of Iran. The goal of his trip is to further the movement for the freedom of the arts and culture and education in Iran. Scanned images of the newspaper can be found below.