Ahwazi Arabs at Risk of Execution 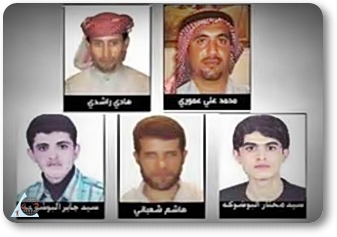 Five Ahwazi Arabs have been sentenced to death in Iran. Thirty international organizations have signed the following letter, calling in the Islamic Republic of Iran to halt the executions. (January 23, 2013) – The undersigned human rights organizations strongly oppose the death sentences issued by the Islamic Republic of Iran (IRI) against five civil society activists who are members of the Ahwazi Arab ethnic minority in Iran. We urge the IRI authorities to halt the implementation of the death sentences against these five men pending further review of their cases in accordance with due process standards. On Friday, January 18, five Ahwazi Arabs from Khalafiyeh (Ramshir), Iran were transferred by security forces from Karoun prison to an undisclosed location. Their families fear that the removal of the five men from Karoun prison indicates that they will soon be executed. These five Ahwazi Arabs activists were sentenced to death in June. The execution sentences were upheld by the Supreme Court, and the families of the men were subsequently notified on Wednesday, January 9, 2013. The five men in question are: Jaber Alboshoka, holds an associate degree in computer sciences and is a private in the military, 28 y/o – Mokhtar Alboshoka, works at a stone mining company, 26 y/o, – Hadi Rashedi, holds a masters degree in applied chemistry and is a chemistry teacher, 39 y/o – Hashem Shabaninejad, an Arabic literature teacher and a masters student of political science at Ahwaz University, 32 y/o and – Mohammad Ali Amourinejad, a Fisheries engineer and school teacher, 34 y/o. In addition to their professional vocations, these five men are founders and active members of the Al-Hiwar (dialogue)—scientific-cultural institute  a group which experienced mass arrests of its members in February 2011. Mohammad Ali Amourinejad was imprisoned in Basra, Iraq at the time. He was transferred directly to Iranian custody at the Shalamcheh border between Iraq and Iran in February 2011. After being held at a detention center run by the Ministry of Intelligence and Security (MOIS) in Ahwaz and tortured for months, they were accused of moharebeh (waging war on God) and terrorism, however the defendants maintain that the confessions obtained from them are false confessions obtained under torture. Among ethnic minorities in Iran, Ahwazi Arabs are subjected to some of the most severe repression from the central government. In June of last year, four Ahwazi Arabs, three of whom were brothers, were executed on similar charges. In addition to these five men, whose execution is imminent, there are more than 30 prisoners on death row who are members of ethnic and religious minorities in Iran. The Iranian judiciary and security apparatus recently carried out the execution of six Sunni prisoners in secret—which has prompted fears among prisoners on death row and their families that more executions of ethnic and religious minority prisoners are on the way. The undersigned wish to express their deep concern about the imminent execution of these five Ahwazi Arab activists. We urge the international community and human rights organizations to take immediate action to halt the execution of these five men. Shirin Ebadi, Nobel Prize Laureate Abdorrahman Boroumand Foundation Arab Organization for Human Rights in UK Arseh Sevom (Third Sphere) Association for Defence of Azerbaijani Political Prisoners in Iran (ADAPP) Association for Human Rights in Kurdistan of Iran- Geneva (KMMK-G) Balochistan Human Rights Organisation Centre for Combating Racism and Discrimination against Arabs in Iran (CCRDAI) Committee of Human Rights Reporters (CHRR) European Ahwazi Human Rights Organization (EAHRO) Iran Human Rights Iran Human Rights Documentation Center Iranian Progressive Youth (IPY) Iraqi Coalition Against Death Penalty Justice for Iran NGO Kurdish Human Rights Association Kurdish Human Rights Network Mothers of Laleh Park/ Dortmund Mothers of Laleh Park/ Hamburg Mothers of Laleh Park/ Los Angeles – Valley Mothers of Laleh Park/Köln Mourning Mothers of Iran – London National Centre of Justice Iraq-UK SAWASYA Centre for Human Rights and Combating Discrimination Shahrvand Yar (Citizen’s Friends) Society for the Defense of Human Rights in Iran – Austria The Arabic Network for Human Rights Information (ANHRI) The Mothers for Peace, Montreal Together against the Death Penalty/ Ensemble contre la peine de mort (ECPM) United4Iran